What was Jerry Weintraub’s Net Worth?

Jerry Weintraub was an American film producer and former music executive who had a net worth of $325 million at the time of his death in 2015. Jerry Weintraub died on July 6, 2015 at the age of 77.

Jerry Weintraub earned his net worth as the former CEO of United Artists and through his various film production ventures and work as a talent agent. Jerry produced such major films as “Nashville,” “Diner,” “The Karate Kid,” and the remake of “Ocean’s Eleven.” Weintraub also produced a number of acclaimed television films, specials, and series, winning Emmy Awards for “Behind the Candelabra” and “Years of Living Dangerously.”

He also produced several Broadway productions and concerts for such musical stars as Elvis Presley, Led Zeppelin, and Frank Sinatra. Just like in a fairytale, the kid from the Bronx without a college degree eventually turned into a silver-haired, lightly tanned and perennially optimistic man, who based his success story on the words:

Jerry Weintraub was born on September 26, 1937 in the Brooklyn borough of New York City to Jewish parents Rose and Samuel. He was raised in the Bronx, and worked as a waiter and theater usher in the Catskills as a teen. Later, Weintraub worked in the mailroom at MCA Records, where he also served as an assistant to talent agent Lew Wasserman. Upon leaving, he formed his own management company, and in the 60s, co-founded the music group the Doodletown Pipers. Weintraub also managed such major acts as Paul Anka, Pat Boone, Joey Bishop, Jimmy Buffett, Jackson Browne, and John Denver.

Weintraub got into concert promotion in 1970, when he convinced Elvis Presley and his manager Colonel Tom Parker to embark on a national tour. Next, in 1974, he promoted a tour for Frank Sinatra that propelled the crooner out of retirement. Over the remainder of the decade, Weintraub managed or promoted concerts for Neil Diamond, Bob Dylan, the Carpenters, the Beach Boys, and the Moody Blues, among others. He became renowned for putting on huge shows, and is often credited with being the first person to organize such large arena concert tours.

In 1975, Weintraub had his first film producing credit on Robert Altman’s musical ensemble dramedy “Nashville.” A huge hit, the film earned four Academy Award nominations, including Best Picture. Following this, Weintraub produced two 1977 films: the drama “September 30, 1955” and the comedy “Oh, God!,” starring John Denver and George Burns. In the early 80s, he produced the crime thriller “Cruising,” the romantic comedy “All Night Long,” and the hangout dramedy “Diner.” Weintraub had one of his greatest successes in 1984, when he produced the smash hit martial arts drama “The Karate Kid.” He went on to produce the film’s three sequels, as well. In 1987, Weintraub formed his own film production company, Weintraub Entertainment Group, and produced the crime comedy “Happy New Year.” A few years later, the company filed for bankruptcy.

Weintraub’s producing credits in the 90s include “Pure Country,” “The Specialist,” “Vegas Vacation,” “The Avengers,” and “Soldier.” He had his next major success in 2001, when he produced Steven Soderbergh’s remake of “Ocean’s Eleven” through his new company JW Productions. Weintraub would later produce the sequels “Ocean’s Twelve” and “Ocean’s Thirteen”; he also appeared in all of the films. The last films he produced were “Nancy Drew,” the 2010 remake of “The Karate Kid,” and “The Legend of Tarzan.”

Weintraub produced numerous television specials, series, and made-for-TV movies throughout his career. In the 70s, his credits included such musical specials as “Sinatra – The Main Event”; “An Evening with John Denver”; “Rocky Mountain Christmas”; “The Carpenters’ Very First TV Special”; “Neil Diamond: Love at the Greek”; and “John Denver and the Muppets: A Christmas Together.” The next decade, Weintraub produced the specials “The Carpenters: Music, Music, Music” and “John Denver: Music and the Mountains,” as well as the television films “Blue Jeans,” “John Denver: The Higher We Fly,” and “The Cowboy and the Ballerina.”

After a long hiatus from television, Weintraub returned in 2005 to produce the television special “L’Chaim: To Life Telethon.” Eight years later, he had one of his most major accomplishments as a producer of the HBO biographical drama film “Behind the Candelabra,” about the late years of the famous pianist Liberace. For the production, Weintraub won an Emmy Award for Outstanding Limited or Anthology Series or Movie. The very next year, in 2014, he won another Emmy for producing the global warming documentary series “Years of Living Dangerously.” Weintraub followed this with producing credits on two HBO series: the short-lived political satire “The Brink” and the dystopian science-fiction drama “Westworld.” 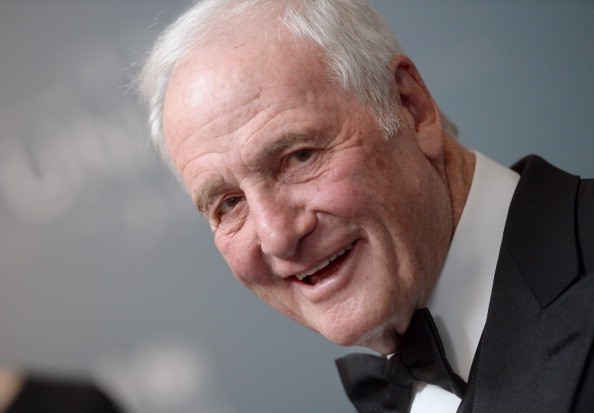 In addition to making appearances in the three “Ocean’s” films he produced, Weintraub played the part of Sonny Capps in the 1993 legal thriller “The Firm.” He also appeared in “Vegas Vacation,” “Full Frontal,” and “Confessions of a Dangerous Mind.”

Weintraub was significantly involved in philanthropy during his life. He often made charitable contributions to such places as the Los Angeles County Museum of Art, the UCLA School of Dentistry, and the Children’s Museum of Los Angeles. In 2007, Weintraub started doing charitable work to help end the genocide in Darfur, and partnered with “Ocean’s Eleven” stars George Clooney, Matt Damon, Don Cheadle, and Brad Pitt to found the non-profit group Not On Our Watch.

Weintraub’s first marriage was to Janice Greenberg, with whom he had a son named Michael. After they divorced, he married singer Jane Morgan in 1965; they adopted three daughters, and separated without divorce in the 80s. Weintraub subsequently lived with his girlfriend Susan Ekins until his passing.

In July of 2015, Weintraub died from cardiac arrest at the age of 77. He is buried at Hillside Memorial Park Cemetery in Culver City, California. Weintraub’s life is commemorated in the 2011 television documentary film “His Way,” directed by Douglas McGrath for HBO.

In February 2016 Jerry’s estate listed two of his homes for a combined $41 million. His mansion in Beverly Hills was listed for $25 million and his mansion in Palm Desert was listed for $16 million. Jerry custom built the mansion in 2004. His estate ultimately accepted $6.8 million for the property in April 2019. Here’s a video tour:

His estate sold the Beverly Hills home in April 2018 for $17.8 million. Here’s a video tour of that property: