What is Bob Woodward’s Net Worth and Salary?

Bob Woodward is an American investigative journalist and author who has a net worth of $25 million. Bob Woodward began working for the Washington Post in 1971. Along with Carl Bernstein, he is best known for his original reporting on the Watergate scandal, which led to various federal investigations and ultimately to Richard Nixon’s presidential resignation. Since then, Woodward has continued to work for the Washington Post and has written numerous books on American politics. As we detail later in this article, those books have generated lucrative advances and royalties for Woodward, powering the majority of his net worth today.

Bob Woodward was born on March 26, 1943 in Geneva, Illinois to Jane and Alfred. He grew up in nearby Wheaton, where he went to Wheaton Community High School. Following his graduation in 1961, Woodward attended Yale College on a NROTC scholarship. He studied English literature and history there, and was a member of the Society of Book and Snake, one of Yale’s oldest secret societies. Woodward graduated in 1965 with his BA.

After graduating from Yale, Woodward started a five-year tour of duty in the US Navy. He served aboard the USS Wright, where he was one of two officers tasked with handling nuclear launch codes. During his time in the Navy, Woodward also served as a communications officer under Admiral Robert O. Welander on the USS Fox. In 1970, he was discharged as a lieutenant.

Following his time in the Navy, Woodward was admitted to Harvard Law School. However, instead of attending, he chose to apply for a reporter job at the Washington Post while taking graduate classes at George Washington University. At first, Woodward failed to be hired due to a lack of experience in journalism. In response, he spent a year at the Montgomery Sentinel, after which he was finally hired as a reporter for the Post in 1971. 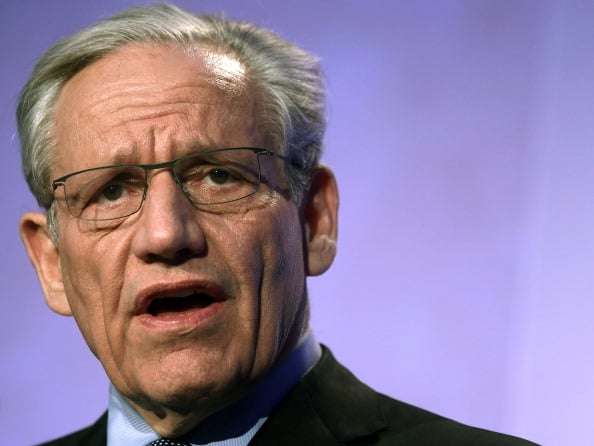 Woodward’s claim to fame came in 1972, when he and fellow journalist Carl Bernstein were assigned to report on the burglary of Watergate, the headquarters of the Democratic National Committee. Working under editor Ben Bradlee, the pair uncovered mass corruption in President Richard Nixon’s reelection committee, including not only its break-in at Watergate but its numerous attempts to cover up the events and their aftermath. Moreover, this led to new revelations of other illegal activities performed by members of Nixon’s administration. In 1974, Woodward and Bernstein penned a book about the scandal entitled “All the President’s Men”; a number-one bestseller, it was adapted into an acclaimed film in 1976 starring Dustin Hoffman and Robert Redford.

Notably, Woodward was the journalist who spent the most time with President George W. Bush; from 2000 to 2008, he interviewed him a total of six times for nearly 11 hours altogether. Due to this, Woodward was criticized for being absorbed by Bush’s White House and being used as a tool of the administration.

As an author, Woodward has penned or co-authored numerous non-fiction books, with many of them being number-one national bestsellers. After the release of the seminal “All the President’s Men” in 1974, he published “The Final Days” with Carl Bernstein in 1976; that book focused on Nixon’s resignation. With Scott Armstrong, Woodward penned “The Brethren,” about the Supreme Court during the years of Justice Warren E. Burger. Woodward’s next book was 1984’s “Wired,” which turned away from Washington politics to shine a light on Hollywood drug culture and the death of John Belushi. In 1987, Woodward released “Veil: The Secret Wars of the CIA,” about the CIA’s covert wars during Director William J. Casey’s tenure. Subsequent titles were “The Commanders,” “The Agenda,” “The Choice,” “Shadow,” and “Maestro.”

Due to his closeness to George W. Bush, Woodward wrote many books on the president and the events surrounding him; they include “Bush at War,” “Plan of Attack,” “State of Denial: Bush at War, Part III,” and “The War Within: A Secret White House History (2006-2008).” During this time, Woodward also published “The Secret Man: The Story of Watergate’s Deep Throat,” about Mark Felt’s belated disclosure of his identity as Deep Throat. Other notable books by Woodward have been about the corruption and catastrophe of the Trump administration, such as “Fear,” “Rage,” and “Peril.”

Woodward has authored many books about American politics, of which 13 have become #1 best sellers. His first book, co-authored with Carl Bernstein, 1974’s “All the President’s Men”, was adapted into a film starring Dustin Hoffman (as Woodward) and Robert Redford (and Bernstein), in 1976.

In September 2018, Woodward released a book titled “Fear” which detailed the inner-workings of Donald Trump’s White House. The book sold 1.1 million copies in its first week which is a record for first week sales for its publisher Simon & Schuster. At that rate, Woodward likely earned $10-15 million before taxes thanks to advances and royalties on the book.

Over the course of his career, Woodward has won a plethora of honors and accolades for his journalistic contributions. He has been the recipient of most of the major journalism awards given in the United States, including the Worth Bingham Prize; the Heywood Broun Award; the George Polk Award; the William Allen White Medal; the Walter Cronkite Award for Excellence in Journalism; and the Gerald R. Ford Prize for Reporting on the Presidency. Woodward also earned the Golden Plate Award from the American Academy of Achievement. Beyond his own accolades, he helped the Washington Post garner Pulitzer Prizes for his reporting for the paper on Watergate in the early 70s and the 9/11 terrorist attacks in the early 00s.

Woodward makes frequent public appearances as a guest lecturer throughout the United States. He has given speeches to various industry lobbying groups over the years such as the Mortgage Bankers Association and the American Bankruptcy Institute, and donates his speaking fees to his Woodward Walsh Foundation. Additionally, Woodward has spoken at a multitude of colleges, including the University of Alabama, West Texas A&M University, Oklahoma City College, and Virginia Commonwealth University.

For the last few decades Bob Woodward has owned an impressive mansion in Washington D.C.’s Georgetown neighborhood. Based on similar nearby comparable sales, his Georgetown home is likely worth $6-8 million.